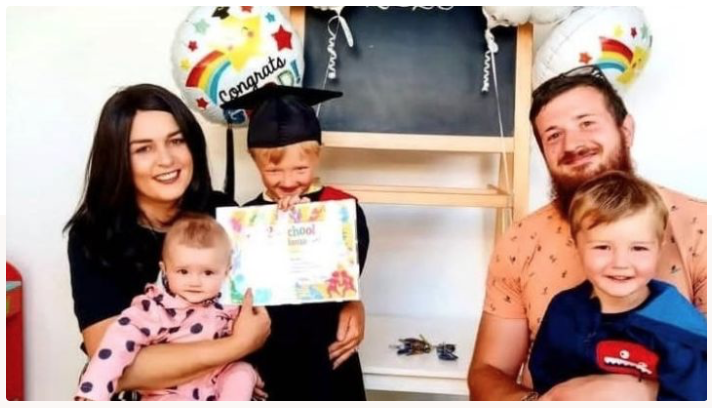 Worth fighting for: Diagnosed with a brain tumour at 32. What do you do?

Alannah Sheehan, 32, comes from County Tipperary, Ireland. She is a wife, a daughter, a mother and an experienced chef. While others her age were saving for a house deposit, planning weddings and celebrating happy milestones, Alannah was told she had a rare brain tumour. A year on from her diagnosis, she says discovering CBD has made all of the difference to her personal outlook on life and her future.

It’s one of those situations we all hope we never have to be in. But for some, living with cancer is an evil curse. No one deserves it, no one knows how or why it chooses its victims and you wouldn’t wish it upon your worst enemy. It’s the opposite of whatever winning the jackpot is.

Every now and then, we come across another person’s story that really makes us think. That’s what happened when a friend sent me a link to Alannah Sheehan’s Instagram profile.

A couple of years older than myself, Alannah, like me, comes from a small town in county Tipperary in Ireland. Like me, Alannah has friends, family, plans and lots going on in her life. She’s great craic, as we’d say, and after spending only a couple of hours on the phone to each other and sending a few emails back and forth, I can tell we would hit it off over a few glasses of prosecco.

This is Alannah’s story of how she found out she has a brain tumour, and what she intends to do about it.

Alannah’s symptoms returned in recent years, but with her age and lifestyle, like any of us, she put it down to something simple. No big deal.

“About three years ago, I started to feel really, really dizzy. I thought it was vertigo. But then it just got so bad. I ended up going to the doctor. I remember walking in town one day and I fell into the wall. I always felt like there was something in one of my ears, I don’t know, it’s just a really weird feeling.”

Now a busy mother to three small children, back then Alannah was working full time, saving ‘like crazy’ to buy a house with her husband Martin.

Last year, the family decided to hold their newborn’s christening the week after Christmas with a whole day of celebrations planned. Alannah describes how that night, in bed, she had her first seizure.

“We had a lovely day and then that night, I had my first seizure ever. I was fast asleep and my husband, Martin, was in bed beside me. He woke up to me shaking like crazy. I was face down in the pillow, I was after biting down on my lip or my tongue.”

Alannah, describing Martin as a ‘messer’, couldn’t believe what she was hearing when she came around and heard from her husband what he had just seen.

“My lip was about five times the size it normally is. And then, I just looked at my pillow. There was blood everywhere. I wasn’t panicked but I was really, really freaked out because this had never happened before. I never would have thought in a million years that I have cancer or anything like that.”

After the Christmas and New Year holidays ended, Alannah went back to her doctor and told her what had happened. A month or so passed and COVID-19 hadn’t yet become a headline in Ireland or the UK. Lockdown was still a fantasy, something that happened in the movies. But so was what was happening to Alannah. While staying with friends for Valentine’s Day, she had her second seizure, and this time it was worse. Luckily, she wasn’t alone with the kids as she had previously planned, and her friend was able to call an ambulance.

“I came back around in the ambulance, but I had no idea. I remembered what had happened up to that point, but I just didn’t have a clue what had happened afterwards, like, absolutely nothing. I had no idea of anything. I knew my name, but I didn’t know what age I was. I knew I had children, but I didn’t know their names or what ages they were, or if they were girls or boys. I just remember, I started crying and crying because I said, ‘where are my children?’ I just didn’t have a clue what was after happening.”

After spending a week in hospital, Alannah was told that something appeared on a head scan. She was told she would need to travel to Cork City, about two hours from her home, where she would meet a specialist.

With her mother and husband to accompany her, Alannah says she didn’t know what to expect, but cancer wasn’t on her mind that day.

“I don’t freak out until I’m told to freak out. I started thinking that I might have epilepsy or something. But I was I wasn’t thinking anything else because I didn’t know that your brain could make that happen. Like I never heard of anything like this.”

The neurosurgeon presented Alannah with an image from her recent MRI scan. On that scan she could very clearly see she had a mass on her brain, but it wasn’t clear whether it was cancer at this point.

“It basically showed there was a mass on my brain. It looked like a quarter the size of my brain. To me, it was like 25% of my brain was a different colour and that was the problem area. It was huge. The minute I saw that I just, I just stopped. I just got really, really scared.”

“Then he tells me the statistics, and I am a very positive person, I’ve had loads of stuff thrown at me in life and I am well-used to dealing with problems. I’m a good problem solver. I was very optimistic. I was like ‘yeah, I’ll be fine. It’s going to be OK.’ When presented with two options, she decided to do something about it. She underwent an awake craniotomy. This is a neurosurgical technique that allows a surgeon to work on a brain tumour while the patient is awake to avoid brain damage.

“I came home from hospital and then I think within two days the whole country went into lockdown. It was like they basically shut the doors behind me!”

The specialist doctor, who she describes as ‘the most straight-talking person I have ever come across in my life’ phoned her three weeks after the surgery and biopsy to tell her that it was in fact cancer.

Alannah recalls how at the time she thought, “I felt like saying, I just had a baby, I don’t need to have a brain tumour!”

Faced with adversity, and an incredibly difficult pill to swallow, Alannah decided she was going to remain positive.

“The thing that made me most upset was, this is never, ever, going to go away. It’s going to go away when I’m dead. There’s no escaping it. How am I supposed to live my life? Then I began to think, right, I’m just not going to think about it. Everyone always says you should be in the moment. I’m always thinking of what I have to do next, what am I doing next week?” Alannah says that for the first time in her life, she’s OK with taking things day-by-day.

“I always kind of get a little bit depressed before chemo. I just hate it. I hate putting it into my body. It kills my soul. It’s like ‘you’re sick’ and I feel like a sick person when I do chemo. My mind over matter – my head is just the best it’s ever been.”

‘The day I found hope’

Following the start of her chemotherapy treatment, Alannah’s sister-in-law came to visit her at home, on what she calls, ‘the day I found hope’.

“Up until this point I was like, oh you know, I’ll stay smiling during the day but I am a lost cause, I’m going to die. I hate saying that now because I just don’t talk like that now.

“She [the sister-in-law] came out to my house and she said look, here’s the plan, here’s what you’re going to do.”

Among the natural-first therapies and ideas which Alannah, at this point, found herself open to was CBD oil. She says taking CBD regularly is the one thing which has improved her sleep and overall mood during the most difficult time of her life.

“She got me CBD oil and I started taking it. I started sleeping like a baby at night, with no sleeping tablets. My mood is better. From that day, I did a full 360. I just completely turned it around. I was like, ‘I’m going to be fine. Like 100% it is just amazing. It stops my seizures. It stops any headaches that I have. When I’m doing chemo, I feel really nauseous all of the time. If I take my CBD oil it takes away a lot of the nausea, probably 90% of it, or I don’t actually need to take my anti-sickness tablets. I think my mood in general, like, I should be clinically depressed! But for the first time ever, it doesn’t make any sense, and I think it is the CBD oil because there’s nothing else that’s different.”

In a time where our mental health is challenged on a daily basis, you would think that someone in Alannah’s shoes might struggle to stay optimistic about life. But Alannah believes her mental wellbeing is better now, than ever before.

“I would have said that my mental health was worse in my life before I had cancer than it is now. I’m so good mentally. And I really think that is the reason.”

So, as she enters her final round of chemo, what’s next? “Going forward I need to just be away from the hospital. I just think they’re so negative. Since I set up my Instagram and have been doing my own research, I am a lot more hopeful. I talk to people every day who have this, who are alive and well for way longer than the doctors gave me. They made it out like it’s some sort of rare thing and it’s not at all. So many people have this.”

Since our pre-Christmas interview, Alannah’s community in county Tipperary raised more than €176,000. The money raised via a Go Fund Me page will go towards Alannah’s medical expenses to ultimately help prolong her life.