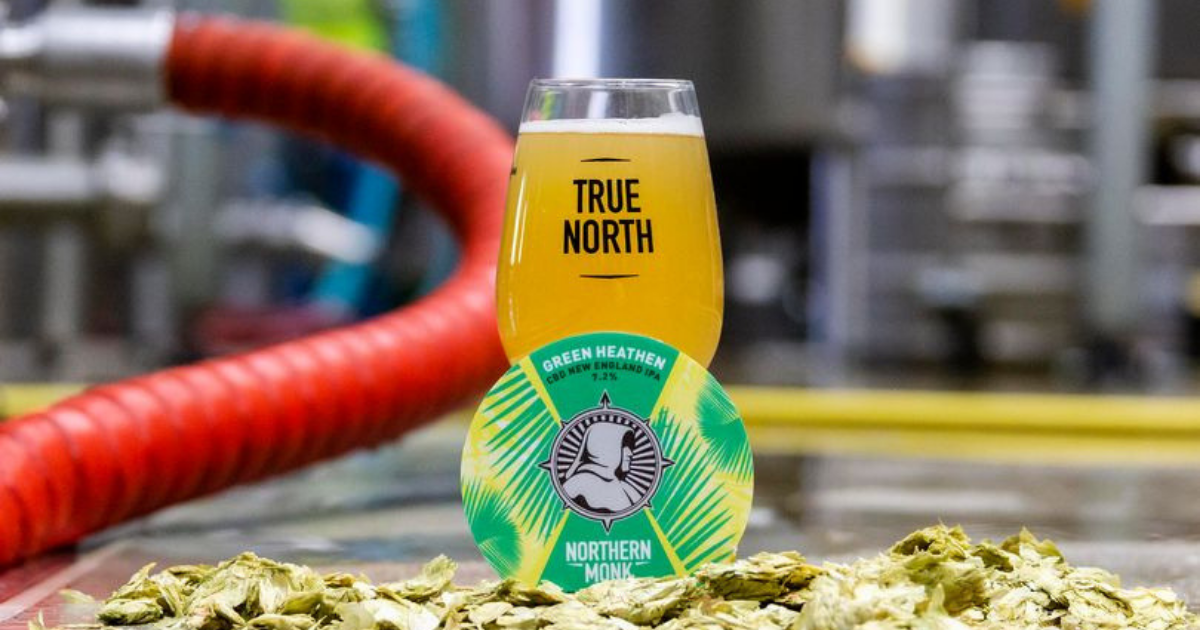 It was perhaps inevitable that drinks companies would see the potential in fusing cannabis and alcohol.

Big names like Corona-maker Constellation Brands are fully on-board with cannabis in North America. But now small hemp and CBD companies are driving the trend in the UK.

Carl Boon is MD for Green Times Brewing and CBD Ultra. Their High Flyer IPA is credited as the UK’s first cannabis beer.

“Hops have a very similar sort of profile to cannabis as they come from the same family. Fusing the two together was a no-brainer,” Carl said.

What Carl thought would be a relatively easy process took five attempts to get right and eight months overall from the original concept to distribution.

Carl opted for a low-ABV IPA as it allowed the cannabinoid profiles to come through.

“We use West Coast hops to give it a tropical feel fruity and sort of taste and smell.

“It’s great on a summer’s day with food.”

The international success of High Flyer was proof positive that Green Times Brewing were on the right track.

The first of six new beers made in collaboration with Northern Monk is now in circulation. Carl also teases that there are ‘a million bottles of rum on the way.’

If CBD is the darling of the wellness world, gin is surely its alcohol equivalent.

The popularity of the spirit made it a logical entry point for hemp-infused spirits brand, HIN.

When medical cannabis was legalised in November 2018, long-time friends Chris Puttick and Mat Graham began looking into potential routes of entry into the industry.

They managed to source some hemp leaf and infused it with hot water and were pleasantly surprised with the taste.

Using Mat’s distilling experience, they then added it to a gin compound before meeting with a local distiller and beginning the tasting and testing process.

“We found that the gin market had become flushed with lots of similar brands and products so we chose to try and shake it up a little,” Chris said.

“Capitalising on the gin market has been a good start for us as we have needed to be nimble, new and fresh to compete in a very competitive market.”

Like High Flyer, HIN spirits utilise the unique earthiness of cannabis that Chris likens to the smell of freshly-cut grass.

The gin is blended with other natural botanicals, with a synergistic blend of hemp and liquorice that comes through on the aftertaste.

“It’s about bringing consumers into the cannabis-infused spirits market with taste rather than gimmicks.

“Our consumers are getting a trusted, consistent and delicious taste from a product the majority of them will have never given to their taste buds.”

The HIN range now includes hemp and hibiscus pink gin and a hemp-infused vodka. The team are now meeting with whiskey brands keen to enter the cannabis space. And, pending clarification from the FSA, a range of HIN CBD spirits are ready to go.

Wee Hemp Spirits is an offshoot of the Wee Hemp Company, founded in May 2018 by husband and wife, Calum and Rebecca Napier.

Rebecca initially began experimenting with CBD after hearing of its potential in combatting the symptoms of fibromyalgia before recommending it to her mother, an NHS nurse.

“She’s got a lot of hip pain because she’s on her feet all day working 12-hour shifts,” Calum said.

“She came to us. She’s anti-cannabis. The stigma’s pretty strong in her and she said, ‘you know, maybe it’s time I gave CBD a go.’

“If she could change her mind, maybe this was something we could build a business out of and help a lot of people.”

Rebecca loved a dark beer but could no longer drink it due to her intolerances. This inspired the couple to make an allergen-free drink that could be enjoyed in moderation.

“It was a case of just one or two drinks and it satisfied. It’s more of a product that you can sit and sip rather than have four or five a night.”

Their range of rums and gins now includes limited-edition CBD-infused bottles. Their CBD gin is in-line for the Innovation of the Year gong at this year’s Scottish Gin Awards.

The couple are also looking to expand the range into a few other spirits and, potentially, canned Canna’B gin and tonic.

“CBD makes the spirits a bit cloudy but as we say, for every cloudy tipple, there’s a silver lining of cannabinoids, flavonoids and terpenes suspended within our spirits.”

Wee Hemp has managed to attract a broader range of customers than a lifestyle brand might.

They’ve received a lot of interest from older people who are only now willing to see past the stigma to embrace the potential of cannabis.

Calum believes that older people can benefit from CBD.

“When an elderly person starts supplementing with CBD and it ups the cannabinoids in their body, they start noticing massive differences.

“It really is quite life-changing to a lot of elderly people.”